So a few weeks ago it was announced that SIFA would be doing a screening of a work by South African artist William Kentridge – a tie-in with the production of the German-Austrian production Winterreise, which features his animations.

I mean, yes, Kentridge is a great artist. And it’s great that he uses his art to cast a light on the sin of white imperialism, because – well, let’s face it: white people have a lot to answer for.

But I’ve seen his stuff so damn much already, in the great contemporary art museums of Europe and America. Hell, I’ve even seen his work before at the bloody Singapore Arts Festival – I had a ticket to the Handspring Puppet Theatre’s Confessions of Zeno back in 2003, which was basically white South Africans doing an appropriated wayang kulit show about an angsty Italian man on the eve of World War One to the strains of Great Classical Music.

Kentridge is White Guilt Personified. Actually, it’s worse than that: he’s Mr. White Guilt Humblebrag, because his schtick is always, “Ohhhh, we were terrible colonialists, I admit that, let’s feel sorry about that while I exhibit the glorious musical and cultural artefacts that my race created.”

Which is of some artistic value! Even if it’s your main schtick! But it gets tiresome when you realise that he’s getting trotted out again and again to represent post-apartheid South Africa when YOU DON’T KNOW THE NAME OF A SINGLE BLACK SOUTH AFRICAN CONTEMPORARY ARTIST.

So that’s what was playing in my mind when we began watching this film. (Or series of films, rather. Kentridge was making about one every year from 1989 onwards.) 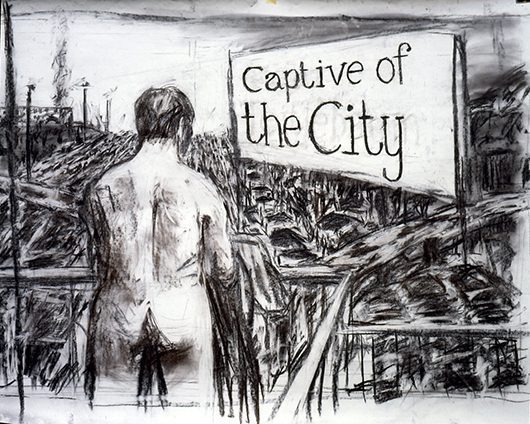 It’s the story of an average white middle-aged Johannesburger named Felix Teitlebaum and the wealthy industralist Soho Eckstein. Scenes of the dystopian city, full of smog like Victorian London, and Felix whacking off in the bathtub, and of course Kentridge’s wonderful handdrawn animation done with charcoal pencils, so that the marks of the past are never fully erased…

And yeah, I started to get into it. Cliché or not, this guy has a wonderful eye for the strange and the shocking and the sad. And the sheer craft that goes into a work like this… yeah, I know he now uses a workshop, but damn, it’s beautiful.

By the way, I also want a cat that transforms into a telephone.

I do, of course, feel like grumbling about the way he portrays black people. They’re the silent exploited miners deep below Soho’s office; they’re the masses of protesters in the streets. They don’t have names, for hell’s sake.

But as Kentridge created installment after installment, I noticed how he began to incorporate songs in African languages in his mournful soundtracks, how he began to portray black children at play, black church rituals, black faces staring soulfully out of mirrors at Felix in exile.

And by the final installment, Other Faces, filmed in 2011 (much later than the rest - for ages it was screened as 9 Drawings for Projection), we get an image of a Johannesburg that’s been decolonized. Soho (or is it Felix) gets into a row over a car accident with a black Johannesburger, and they’re yelling at each other wordlessly, and the backgrounds are all contemporary markets, while images of average black city-dwellers posing for street photographers flash in the background.

Sure, it’s not a happy ending, per se. But we’ve got beyond your standard 19th century melancholia. The city’s been decolonized, and maybe Kentridge has been as well.

So maybe… just maybe Winterreise will be a little more sophisticated than the old “white people are awful, I’m a white person and I realise this, please feel bad with me” shebang. I sure hope so. Not too optimistic, mind you.

Ahhh, but my friend Lionel came, and he’d never seen Kentridge before, and he was blown away. Just ‘cos I’m jaded doesn’t mean young’uns shouldn’t have fun.

By the way, here’s some work by black South African artists you should check out: