It's just a pre-festival festival, but we had to have two opening parties. #SG50 all the way! 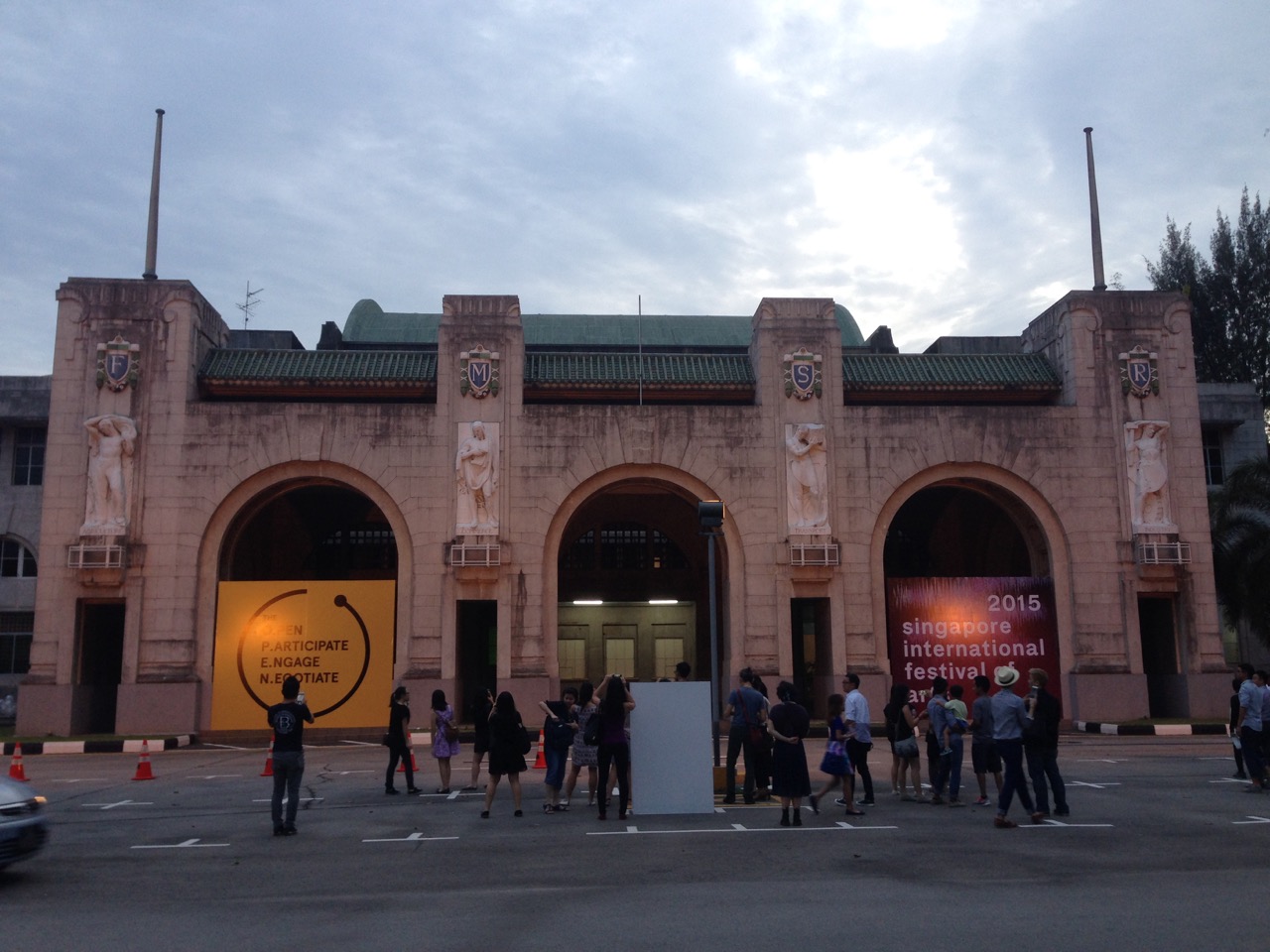 For the uninitated: these folks aren't just Instagramming. They're doing the augmented reality tour of the site. Most of them, anyway. Wireless network was so overloaded a lot of us couldn't download the bleeding app. 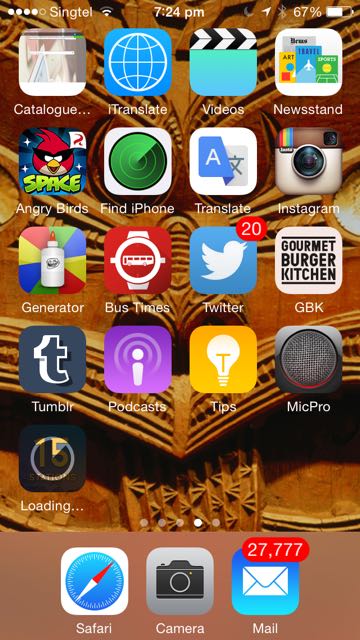 Luckily, Keng Sen managed to distract me with a speech. 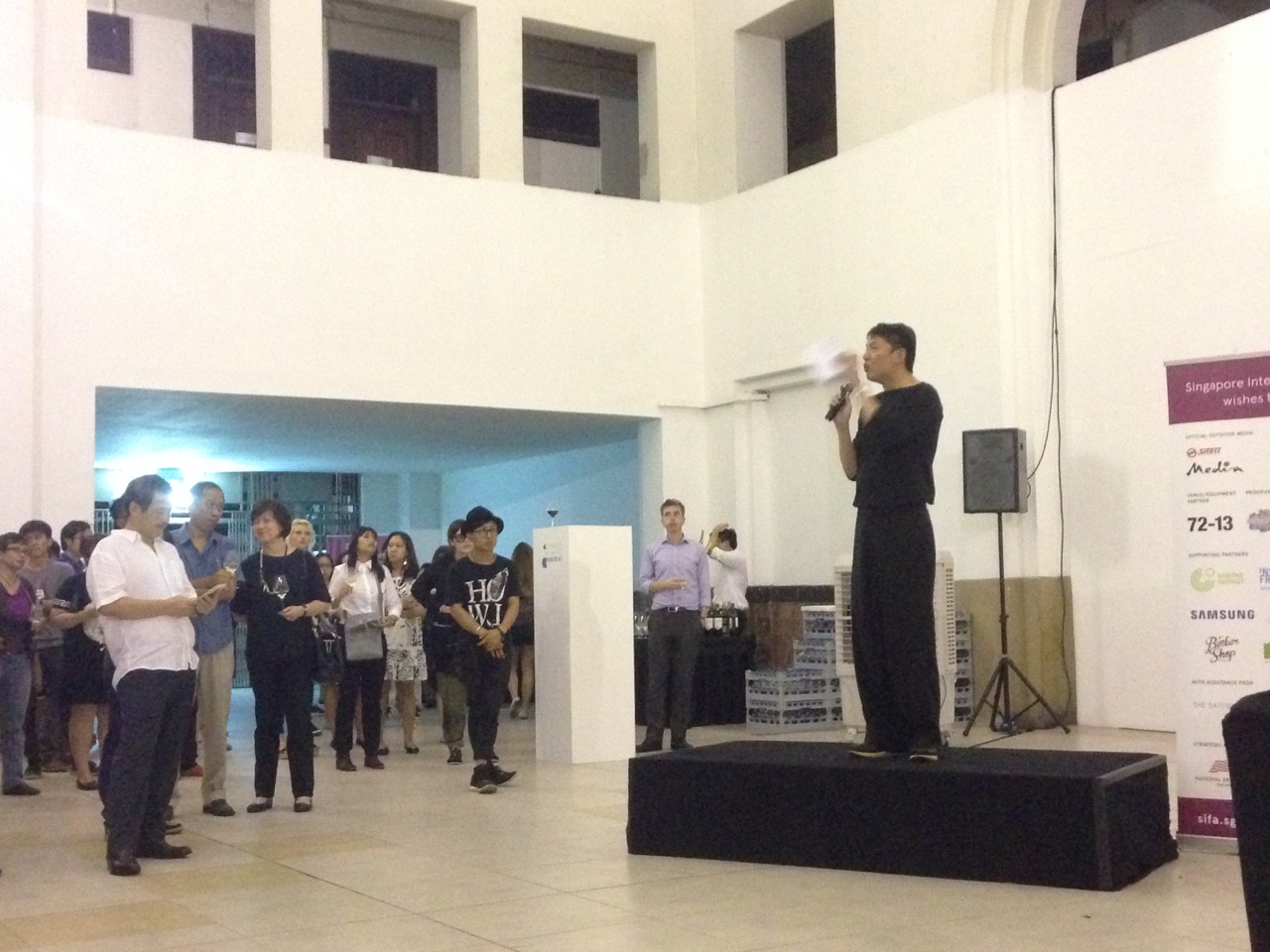 KS: Is this too much? Does it sound like God’s voice?

The mike was extremely echoey in the chambers of the railway station. Still, by lip-reading, you could tell he was thanking the National Arts Council and its CEO Kathy Lai, who'd raised funds for SIFA, and Rebecca Li, who'd managed to secure the lease on the station for the duration of the festival.

KS: Why are we doing this here? SIFA wants to say that Singapore artists should do wonderful, interesting events here. We think this could be a wonderful space for artists, a wonderful theatre.  So this [performance] is a first draft for a purpose that buildings like this can have in Singapore. It’s not just about hardware but about the life that was here, and the life that can continue to be here.

If you look at the beautiful façade outside, you’ll see argriculture, industry, commerce, transport… but no art. So we want to propose art as a way to bring this country forward.

Noorlinah Mohamed also had a turn at the podium.

NM: Thank you for coming and downloading. It was welcome to see so many phones whipping out and not SMSing! 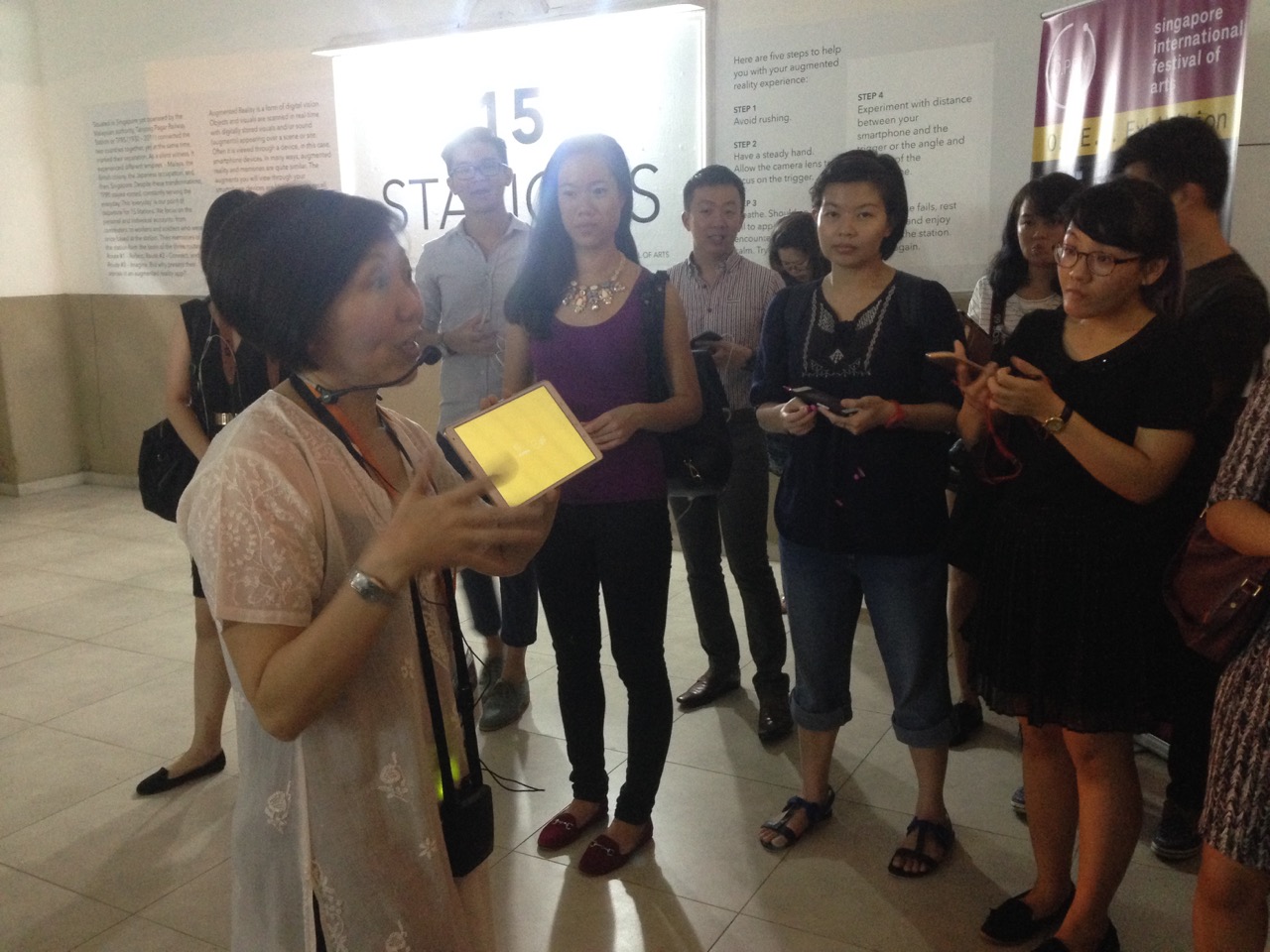 The thrust of her speech, and her later guided tour of the installation, was that much of the work had been created by NTU students - mostly international ones, at that; diasporic Asians from the US, Canada, Finland, New Zealand and Malaysia. They were the ones who'd interviewed fellow millennials about their connection (or rather lack thereof) to the station; they were the ones who'd envisioned its possible futures.

And they'd learned how to create the app in just a month and a half! You can do it too, apparently. They'd downloaded Junaio and Metaio Creator (which I've suddenly noticed are soon no longer available and already no longer available, hmm hmm) and taught themselves everything.

Great exchange program, the students had said. They got to work with Singaporean artists, find out about Singapore history... and then flown back home too soon to attend the launch. Alas.

I wonder how my download's going?

Anyhow, I went on a couple more guided tours. 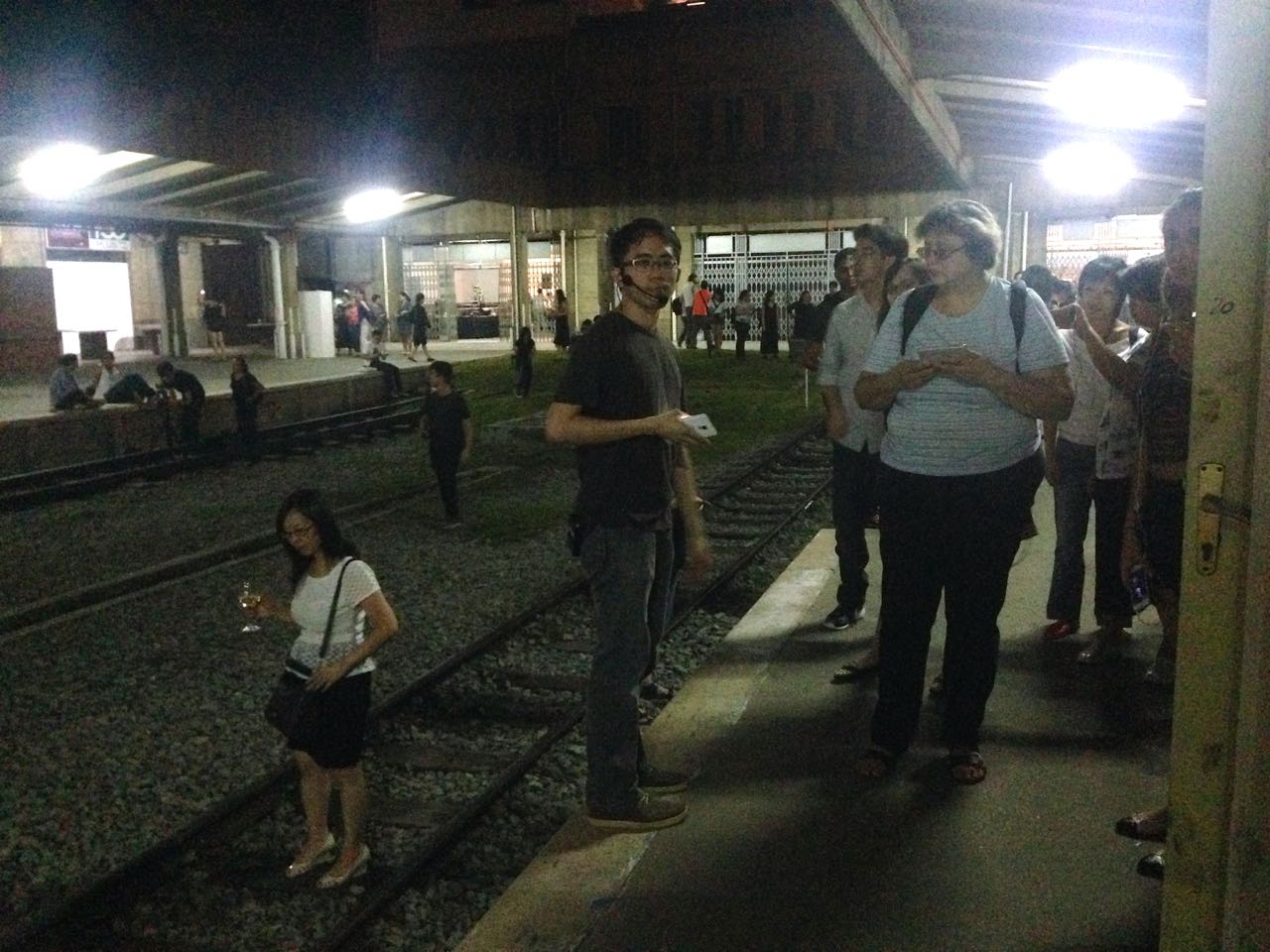 Christopher Fok (above), the young playwright-director who scripted the Route 2 segment, shed some light on his work. Turns out he had to create a whole scripted drama out of a single 1-minute segment of a National Archives Oral History interview with a woman who used to wait at the station every week for her Malaysian husband to come home. Tricky business.

His segment is activated by QR (quick response) codes, by the way, not AR (augmented reality), because AR takes up much more data, and the app was already getting pretty bulky - which is why it's glitchy even now.

He also revealed abandoned plans for the experience: there were supposed to be ghosts gliding around the station (too high-tech) and also animated versions of the murals (augmented reality wouldn't have been able to keep up with the way they looked different in different lights). 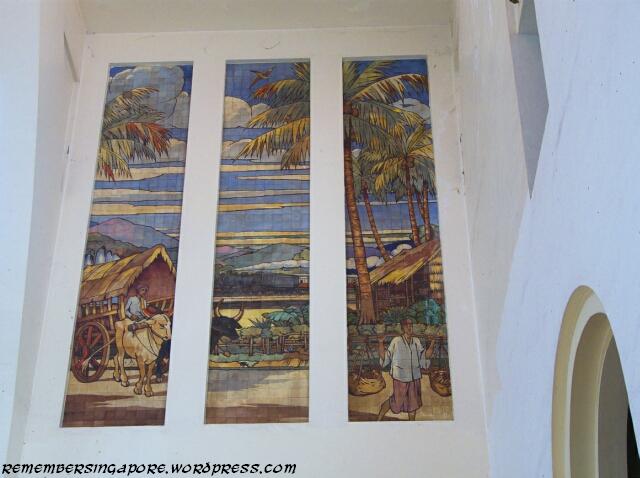 Also, the place is haunted. Lots of stories from way back. And also from the bump-in. One day, after the crew set up the scaffolding around the cafe area, they broke for dinner, and when they came back they discovered someone had perched a little toy car on their scaffolding...

And the next morning it was gone again. Freaky.

Here's a few parting shots of the event: 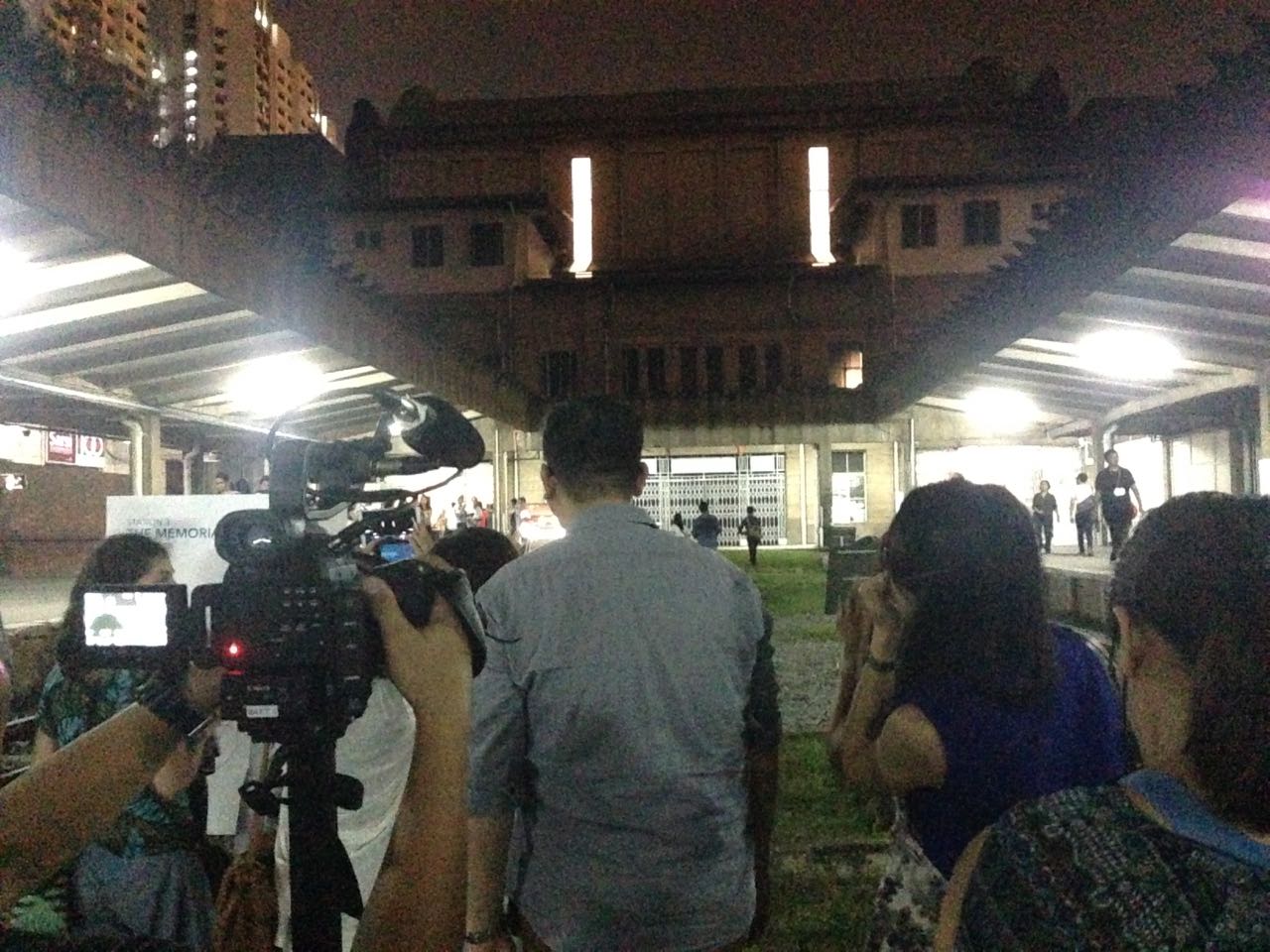 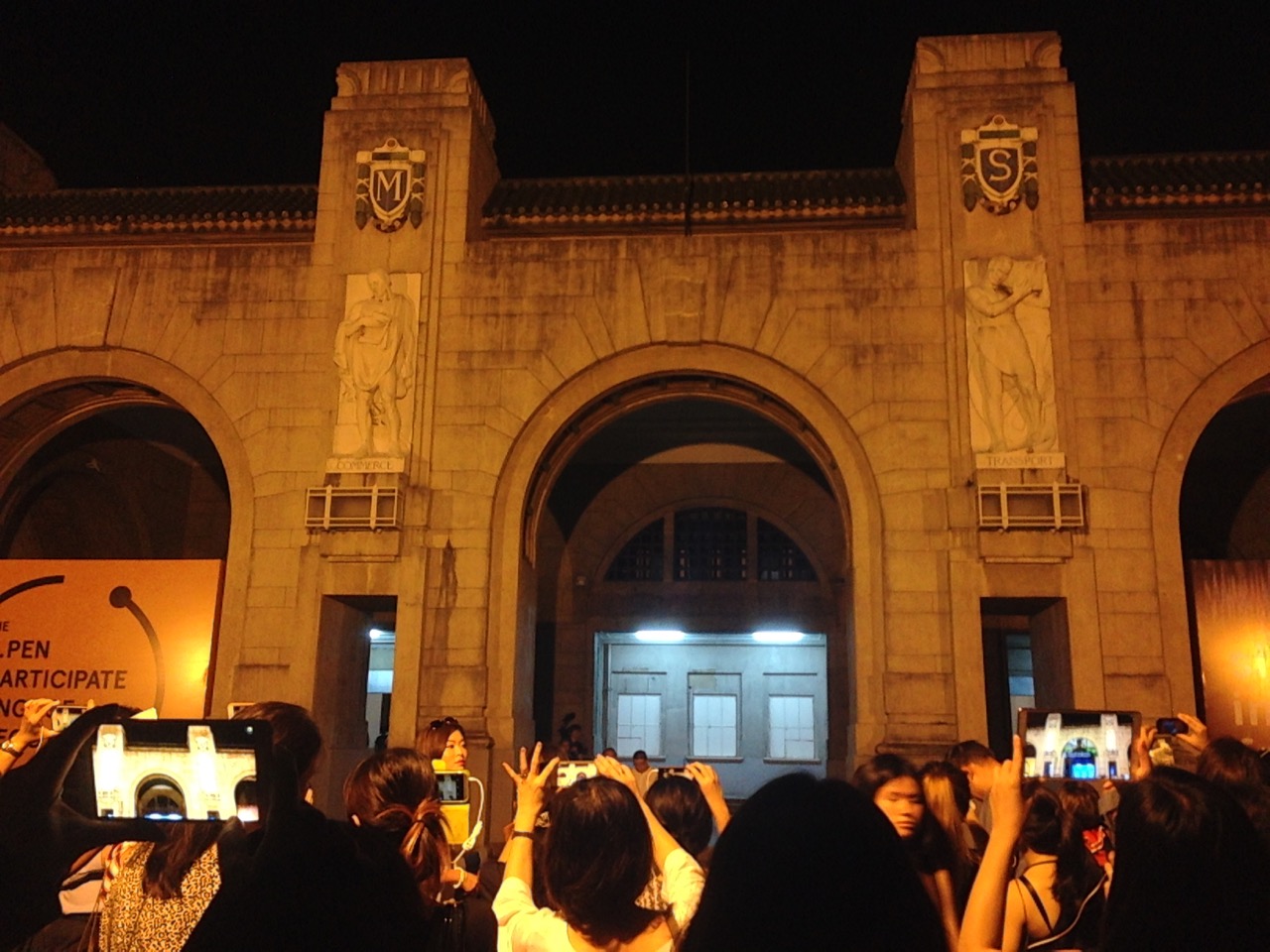