We’ve already seen her Spring/Summer 2017 collection, inspired by indigenous Mexican clothing. But she had loads more to say—so much that I’ve decided to divide her talk into several sections.

This section focuses on her processes. But before we get into that, how did she become interested in indigenous fashion?

CF: I was born in the north of Mexico near the United States, where people dress as westerns, and we’re very aware of western clothing. We wear dresses, we wear jeans, it’s all tailored. But my father was the director of the Museum of Anthropology. And we used to travel around museums in Mexico. and in those cities they still had indigenous communities.

And I was very aware of the beautiful clothing the girls were wearing. (Points to girl in the audience.) I was your age, 11, 10 years old and I saw these girls dressed beautiful, and I said, “Mum I want to dress like them.” And I saw in the market they didn’t have those beautiful clothing. 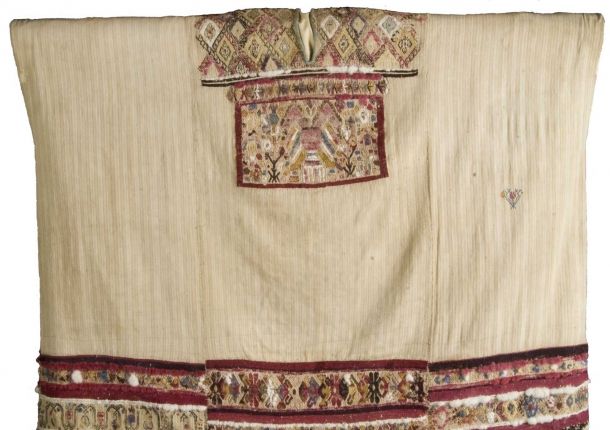 Second, they’re not that mainstream. Indigenous Mexican designs are based on a completely different format from Western designs—they’re almost all made out of squares and rectangles, which are folded and pleated around the human body. Mind you, modifications have happened over the years:

She explained other aspects of the crafts of weaving. How one of her indigenous collaborators, Doña Otilia, uses eight sticks her husband gave her to farm cotton in the mountains. How she harvests the cottons and eats the seeds as snacks, sometimes cooking them in tortillas. How she marks out the patterns of maguey thorns and animals in the threads before she even weaves them.

CF: So this is completely alchemy. You have eight sticks, you grow the cotton and suddenly you have this amazing huipil.

You start from the end, and you turn the loom, and you finish in the same place, the white loom. The cycle of life. And every single of these worms, they are worms that become a butterfly. All of them [the patterns] are different: birds, soldiers, ladies, they have rabbits with full stomachs. I don’t know what that means, but that’s what she says it was.

For black dyes, fabric is dyed with mud and leaves, creating a colour that never fades. For red, they use cochineal, made from crushed beetles. And with woolen garments, sheep are reared only for wool, not meat, so they run around freely in the fields. The way she describe it all is kind of magical, and kind of utopian.

CF: For me, clothing, it’s an open text. Textile: text. It’s an open book. In a communities you can tell in drawings if the lady is married, if she’s not married, where she comes from.

But speaking of utopia: how does Carla avoid being exploitative? She isn’t indigenous herself, but she has figured out how to interact with indigenous groups in an egalitarian way.

She doesn’t go to them with plans for capitalist reinvention. Instead, she waits for those who specifically want to work with her company to approach her.

CF: For example, I want to work with Puebla ten years. And I have to wait ten years. So finally it came the opportunity to work with them. We go there, we sit with the women, and we decide what are we going to design. Sometimes I say, “We like these birds.” You have birds, flowers, horses, dogs, and we decide on the colours.

If you work with people and they want to work with you, first of all they open their homes and their hearts. And I’ve been doing that for many years and I know what they’ve been through. And I can say there’s this experience and love, and I eat whatever they eat, and I sleep with rats and I don’t care. And when you become part of the family they know it.

And we have a method that is very easy to go on and sell. I love to sell. And they love to sell, because at the end of the day, they say, “You empower women,”, and I say, “No. I am a designer I know how I can empower women. I sell what they like to do.” So we like that. We like to live for our work and give our kids a better life and better opportunities.

And as for the designs—they’re not the same kind of clothing that indigenous communities wear. She commissions the fabric, and specific stretches of cloth with specific motifs. But the items are put together using a contemporary designer’s artistic eye: the trending colours of the season, or else the way the clothing itself is cut.

CF: In Mexico at the end of the day it’s very hard to use a rebozo, a shawl. And it was very difficult to sell shawls, because you don’t belong to the community, and you don’t know how to tie it, and it falls apart. So we put in two holes [for the arms], and now it doesn’t fall apart. And it’s exactly the same and it doesn’t fall apart.

You have to do radical design to transform fashion. I could not compete and you would not invite me here if I were to do the traditional things. I like the mix; I like that I go out and I feel trendy and cool. And the pieces have a story behind them.

One thing she’s tried to avoid, however, is mimicking western fashion too much. Indigenous designers have suggested making their work more mass-market by adding features like buttonholes and zippers. But this doesn’t work with the thick cotton and wool fabrics they’re making—the buttonholes pop open at a touch.

Far better to stick to Square Root fashion, Carla says. The cut means it’s zero wastage, super-ecologically friendly, and the same dress can be worn by a 19 year-old girl or by an 80 year-old woman—or by a man, in fact, since most designs are unisex. Fabrics are easily secured with sashes or belts. (Buttons and zippers, she notes, take forever to biodegrade.)

CF: We don’t have to sell hamburgers and pizzas. We have to sell tacos. That’s what we know how to do. Let’s not sell Italian fashion. Let’s sell Mexican fashion.

And on a related note:

CF: Sometimes we try to make it more sexy. But sexy is feels confident in what they’re wearing. Like women feel intelligent, and men are falling in love with intelligent women.

She’s not only selling fabrics, mind you—she noticed how the traditional craft of making wooden molinillos (hot chocolate whisks) is in trouble, because everyone’s already got one at home or is using powdered chocolate. So she’s collaborating with a carver named Don Juan to turn create molinillo-shaped bracelets and sandals and beads for dresses and jewelery.

Part of the reason she can sell all this to customer is that she documents the painstaking processes of creating each item. There are videos in the store, and videos that come in package deliveries of clothing, so customers understand the intensive labour they’re paying for and the culture of artisans they’re supporting.

CF: When you show the process people understand how beautifully things are made. And then they pay for it. Then they keep it. (Sometimes you just buy fast fashion, and you buy and other one and another one.) These are the kind of clothing you keep for your children.

She sniffs at the videos of Italian craftsmen punching nails in handbags in the Hermés store—sure, the manufacture of those bags may be sophisticated, but what’s happening in Mexico is far more complex.

But it’s not all pre-industrial technology. For large orders, she does use some industrial production. And she also uses Whatsapp and videos in her collaboration with the indigenous designers, so that they can mutually approve their designs.

CF: They have Internet, they have computers. And Otilia, she doesn’t speak Spanish, but she has Whatsapp. They see the fashion catalogues. And actually for the Prince Claus Awards they went to the catwalk. And they said, “Oh my god, why are these blond giants there using our things?”

More in the next section, which will cover ethics and globalisation!