After Winterreise, I hopped in a cab with Tay Tong and made it for the second half of Archive Box #2 at 72-13!

Sadly, I missed Venuri Perera's performance, pictured above, as well as Rani Nair's. But I did get to see Chey Chankethya's interpretation of Tsuyoshi Shirai's archive box. It was honestly a little impenetrable, given the lack of context: against a track of Khmer music, she rolled onto the stage, crockery and cutlery falling out of her clothes, which she gradually removed until she was just in a sports bra and shorts. Then she invited volunteers from the audience to rearrange the items strewn across the stage: first one volunteer, then two (one going fast, one going slow), then five all at once according to her dictation of time...

Most of the volunteers were dancers and choreographers themselves, so that was cool to watch. I was the first volunteer, and I can assure you my movements were ugly.

Then we had some grapes and crackers and cheese and got together for a talkback.

Ong Keng Sen: Last time when we got here it was midnight and we were all exhausted, so this time we will focus on each pair of creators and users.

First up was Chie Ito, whose archive box was interpreted by Rani Nair.

Chie Ito: I’m glad she didn’t destroy my box with a hammer.

Oh dear. We're at the end of the festival already, and absolutely no-one's told her what "box" is a euphemism for?

Anyway, she went on to talk about how it became easier for her to create her archive box once she thought of it as a gift. 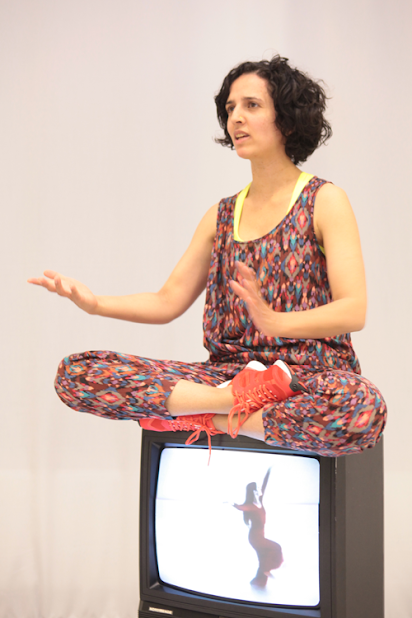 Anyhow, Rani Nair was an ideal candidate for the Archive Box project, given that she'd already been involved in a project of archiving a dance, as portrayed in her work, Future Memory.

Ito: I’m really sad and sorry that I couldn’t see your performance of Future Memory.

Nair: The previous archive had a lot of history and memory about the person, but this box, it had no memory, I’d never met them.

Nair: Keng Sen said we could choose the box, but we could only see a photograph of a box. But yours had a word on there that said open with a punk spirit, and I thought, "Someone who writes this is very generous, do your own artwork!" And then when you do a box, it’s very obvious that it’s a gift. It has glitter, different textures, it says do how you want to, dance how you want to, there was a CD that I should play when I opened it… I felt that was very strong.

There was a problem. When I had the box, I had all this idea with what I would do with the DVD, and the contents were very difficult to do what I want to do. Before, I decided I odn’t want to dance. I don’t feel like dancing anymore, I’m very lazy. But everything in the box said I love dance, dance when you want to… everything was very generous, but I really felt I had to dance!

It was a gift, but very difficult.

Ito: This thing that you performed today.. who made it?

Nair: I feel I made it. I used the punk spirit.

Ito: If you feel that way, I feel that the box was successful.

Keng Sen also chimed in with some thoughts on the dynamics of the project, based on the terms used in English.

KS: When we use the word “user”, it suggests there is no loyalty.

We moved on to Natsuko Tezuka, who talked about how the direction of her dance changed once confronted with the trauma of the Tohoku earthquake and nuclear accident of 2011, and how it refocussed her choreography into the world of traditional dance. She created an archive box that was used by Venuri Perera, which included (among other things) a set of fortune-telling cards.

Tezuka: Did you use them?

Perera: Yes I did use them. I just randomly picked cards when I hard the feeling that nothing was happening, which was  a lot of the time. And some of the questions were quite therapeutic. I initially thought they would help me move, get into my body, but they actually mae me think about myself and my situation. Like:

What do you think is sacred, and what makes you feel that?

Ask yourself what you really want to eat now.

Write ten things that you feel good about.

Write ten things that you feel unpleasant about.

It was really kind of psychological for me in a sense. And certain things felt like, there’s just one thing: to crawl around on your knees until you feel comfortable with that…

My boyfriend was tired, so we left before we moved on to Kethya. But according to Keng Sen, many of the archive box reinterpretations have become seeds of new works: new routes of cultural transmission. How in Japan they had

OKS: When we were dreaming of this in Japan, we had a dream of copyleft rather than copright. It was an act of faith, in a way, divorcing yourself from this baby that you’d made, projecting it into outer space and then someone takes the space...

Ah, Keng Sen. No-one mixes his metaphors like you do. <3