I turned up late at this talk, which was awful of me, because it’s the last event I’m covering as part of The OPEN. Plus, it turns out Navtej is a pretty fascinating character!

He’s from Punjab, which sounds cool enough to most of us – it’s the birthplace of Sikhism and bhangra after all. But it seems there’s a common view in India that the north is not very cultured compared to the south.

Navtej Johar: The joke is that Tamil Nadu has culture, and Punjab has agriculture.

Navtej actually started out doing political theatre, not dance. He only started learning bharatanatyam (a southern Indian dance form) as a nineteen year-old, curious about strengthening his dramatic techniques. And it was a foreign art form to him, full of foreign movements and foreign syllables in a foreign language.

And it seduced him. He fell in love with the music, the stories, and the tradition – even as he grew to distrust everything it represented.

NJ: All art, especially dance in India, is caught in these “isms”. In India, classical dance is caught in nationalism. We talk differently, we hold ourselves differently, because we are cultural ambassadors. There is this high culture which we have to carry with us. And Marxism and feminism are the isms that progressive dancers have to carry.

What I was looking forward was an autonomous space outside the “isms”. And I realised the space I was looking for was actually a very queer space, because it’s paradoxical. The sacred and the profane are actually very queer for me. It’s a messy space, it’s not a clean space. I wouldn’t even say it’s an LGBT space. Because it’s on an edge.

He doesn’t even trust LGBT activism, because that’s another belligerent “ism”. (shrug)

He’s therefore been investigating the roots of bharatanatyam. He’s especially interested in the performances of devadasis: women ritually bound to serve in temples.  Watching recordings, he was fascinated by the lassitude of their performances – Indian dance today is marked by eagerness, he said – and by their sensuality: how they’d bite their lips, a thing his teacher had told him never to do. 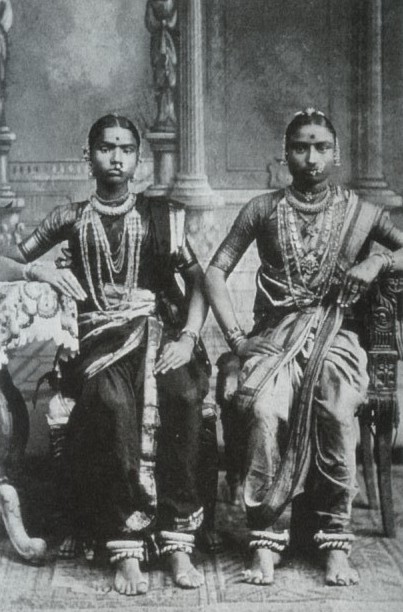 NJ: If you hear the voices of devadasis, it’s completely devoid of eagerness. It’s full of disdain, it’s fatigued, it doesn’t have the desperation to catch even though it’s making all the sounds of entrapping.

So basically, the modern masters of Indian dance (such as Rukmini Devi, a choreographer inspired by Anna Pavlova’s success) had sanitised the culture of devadasis, forbidden all play with the teeth and the tongue, stripped it of its original soul.

NJ: Indian dance is not Indian. Indian dance is constructed to be shown to the westerner. To show we are not sluts. We are actually very proper. The Indian dancers will kill me for this, but we were shamed, and it is a construct to set the record straight and say actually we are quite alright.

Frenemies is therefore a foray into presenting the lives of the devadasis on stage, unsanitised. But it’s not his first attempt at this.

Back around 2012, he presented Charumathi Claire Singh: a three-man dance that was both a more recognisable representation of devadasi culture and a more literal rendition of Genet’s The Maids – there was dialogue from the original play preserved, more literal slapping around, and actually wailing in high pitched voices. Frenemies has only been performed once so far – in India, dance shows are usually done only presented on a single night in each city – but with its wordless, stylized scenes, it clearly represents a distillation of his earlier ideas.

Navtej has always had an intercultural element to his practice – for instance, he says one reason he was drawn to bharatanatyam was because its Carnatic music was similar to Sufi music, which is common in the Punjab – though he laments that Carnatic music is too sanitized, too rushed to allow contemplation.

And over the years, he’s found it pays to develop his practice through intercultural collaborations. His first, with a British dancer, was pretty awful – she came into it with a completely different agenda, so they came out with a finished product and called it quits from there. Cured him of his love for collaboration for quite some time, she did.

His second, however, was a dream. Hiroshi Miyamoto was a classically trained Japanese dancer who knew all about the geisha tradition and even had a bit of bharatanatyam in his background. Together, they crafted a duet named Mango Cherry.

NJ: The collaboration was absolutely seamless… We didn’t actually speak every much. He had a very Zen presence, we would just go into the studio and we would begin. It was the sweetest collaboration that could have been.

One of his later collaborations, Fana’a , involved a reaffirmation of Punjabi culture: a retelling of two classic Indian love stories, one from the north and one from the south, accompanied by a blending of two dance styles and the intertwining sounds of a Carnatic orchestra and a Punjabi ensemble.

NJ: When I started making it, all of my friends, even this friend here, told me they would not come and watch it, because it was so bizarre. But when it happened, it was one of the most glorious works I have ever done. It was very rich. And without a doubt, Madras was one of the places which perceived it the most…

When we first entered the studio, the two of them [the orchestras] refused to speak to each other.  They just snickered at each other, because they thought so little of each other. And then they started working together. After the tour, they actually toured as a music group.

In spite of all this hodgepodgeing – because of it, really – he says he specifically creates his work for an Indian audience, because he’s intrigued by the history of dance.

NJ: This is actually… you see for the longest time I thought that dance was trapped in history, which it is. But the more I started to explore and looked through the historical documents, and from history I started to go into philosophy and I started to realise one very very big thing.

I realized in India, over the last two centuries, philosophy has been merged into religion, because there is such a binding now between philosophy and religion that we can’t think of philosophy without religion. So a lot of progressive people have abandoned Indian philosophy. And when I started to go into it I realized that there is a tradition of philosophy which is not only distinct from religion but opposed to it.

And that has enabled me to ease into the abstraction. The sangha philosophy, it’s called materialist philosophy, and it’s based on the theory that matter can be distilled into essence without the intervention of God. You can go into the fineness without it being touched by God or religion.

And the Indian arts come out of this philosophy, where matter can become spirit. Not because the arts are spiritual… Reality is real, matter is very beautiful, dealing with materiality can be very fine. And that for me is what art is today.

One final note: Navtej and his crew are actually very happy with Singaporean audiences, whom they say have been utterly attentive and receptive to their work, never focussing on its more kitschy aspects.

I doubt this is representative of the nation as a whole: the folks who’ve turned up have tended to be more educated about Indian traditions – some because of their own background, some because of the presentations on Nagarika and following TheatreWorks for so long.

Likewise, when the tour manager told me he thought the curatorship of The OPEN was exemplary of the high standards of the arts in general in Singapore, I had to tell him to slow down for a minute. The OPEN is really different from other arts festivals in Singapore: much less populist, much less nationalist, much more committed to specific themes and trajectories. It’s only been going for two years so far, and who knows if it’ll stay on after Keng Sen steps down from the directorship? I don’t think it will.

This’ll provide fodder for thought in the next few weeks till SIFA proper starts up. Best wishes to all!

ADDENDUM: My friend Sangeetha Thanapal had the following comment.

But point to note: bharathanatyam is not South Indian, it's Tamil. It's the classical dance form of Tamil Nadu. Lots of southerners do it, even lots of Northerners in the diaspora, but that doesn't make it South Indian in general. The rest of what he says about the sanitization of it is very true. But he doesn't mention an important aspect of it; caste. Devadasis were of a lower caste and for years bharathanatyam was considered a form of dance for the lower castes. When Rukmini appropriated it, it became palatable to the upper classes and castes. But it also made millions of lower caste women unemployed. And now it's considered such a classical form that Brahmins learn and teach it, to the point of it becoming inaccessible to other castes. There's a horrible element of theft and erasure that I felt wasn't really talked about that was quite important. He was also very right about how it was sanitized with the coming of colonialism, and why it's become this strict and classical art form.