Avega, the Passion, by Pushpamala N.

Last night, Pushpamala N.’s  The Arrival of Vasco da Gama went on display. Upstairs, the lady herself was present for a salon.

(Yes, we call them salons instead of talks. We are fancy as FUCK.)

Pushpa started out as a sculptor, but she’s started doing a lot more works of photographic recreation – performances, in a sense, because there’s a similar kind of performativity and intense research and behind-the-scenes hullabaloo involved as there would be for any theatrical production.

In Avega, the Passion (2012), she’s recreating images of three female characters from the Hindu epic of the Ramayana. (Basic primer on the Ramayana here.)

PN: When I chose the Ramayana I also chose it as a very contemporary theme. I don’t know how much you know about Indian politics, but the Ramayana has been central to national politics in India. The ideal kingdom is called the Ramaraja, and in the past decade there has been a cultural nationalism which has been invoking the figure of Ram as a hero and a god. It’s very problematic.

So when I reclaim the Ramayana, I’m looking at the past and the present… Yesterday I went to the DECK and the curator was saying, “[ Lu Guang’s] work is very political.” And I said, “My work is also very political.”

There’s four parts to Avega, each named in both Sanskrit and English. Each one’s been captured on film (either photography or video or stop-motion), but not in a documentary realist manner: instead, she’s channeling that weird, magical flavour that photography and film had in its earliest days: a whiff of Julia Margaret Cameron, a gust of Méliès.

And of course, Pushpa plays the lead in every scene. :)

This is centred on the character of Kaikeyi, the much-maligned queen who convinces King Dasharatha to send his son Rama into the forest. She’s in martial attire because the text says she was brought up to be a warrior, and actually saved the king on the battlefield by serving as her charioteer.

There’s a tradition that she got her way by taking off her jewellery and throwing a tantrum in the “anger room”, which was apparently the part of every Indian palace where women could let loose when they got mad.

PN: I was telling a friend this and she was very offended. She said, “Men can be angry anywhere, women have to go to a room!”

This one’s about Surpanakha, sister of the demon king Ravana, who falls in lust with Rama and his brother Laksmana. When she attempts to seduce them, Laksmana cuts off her nose and ears.

Disfigurement was a worse sentence for women than death, Pushpa says. It was like an acid attack.

By the way, the warrior is a young kalaripayattu expert named Ramkumar who just happened to be in town that week. Cool, ain’t he?

And these two are about Sita, the wife of Rama, the ever-faithful woman who willingly followed her godlike husband into exile through no compunction but her own. Who was abducted by the demon king Ravana, and ultimately rescued from his clutches by Rama and Laksmana, etc. Go read the story yourself.

What makes this sequence particularly cool is that she's doing direct visual quotations from other famous works of art: Pushpa said she’s naturally drawn to the stories of Kaikeyi and Surpanakha, because they’re both vamps. They’re punished for their sexuality, but at least they asserted themselves as persons with desire and agency in the first place.

What makes Sita’s story so fascinating is that she’s completely pure, and yet she’s still punished for her sexuality – she’s kidnapped by a demon, then after being rescued, she’s forced to go through a trial by fire to prove she didn’t succumb to his advances, and THEN she’s still banished to the forest because of society’s suspicions.

But after Pushpa's presentation, I was kind of dubious. What should I be impressed by, conceptually, in these pieces? It's not at all uncommon to interpret the Ramayana from a women's perspective - a point she agreed on during the Q&A. Several novels have told the tale from Sita's perspective. So did the American animated film by Nina Paley, Sita Sings the Blues. So did Singaporean choreographer Santha Bhaskar (who was in attendance), in one of her 1993 work Sita's Complaint. So did Singaporean artist Jimmy Ong, in his Sitayana series.

Nor was I altogether convinced by her description of the abduction narrative as a universal myth - yes, it happens to Sita in the Ramayana, and Helen in the the Trojan War, and loads of Zeus's lovers in Greek mythology, and the poor old Sabine women in Roman myth.  But that's about it. You've got, what, India and the Mediterranean? It's not a big theme in Chinese or Japanese or Southeast Asian legend. (Correct me if I'm wrong.)

But on a second viewing, I've realised that what makes Pushpa's oeuvre cool is that it's an exercise in mythic self-portraiture. When she's embodying Sita or Kaikeyi or Surpanakha (or da Gama, for that matter), she's asserting that she encompasses these larger than life historical characters. She is Woman. She's all that. Deal with it. 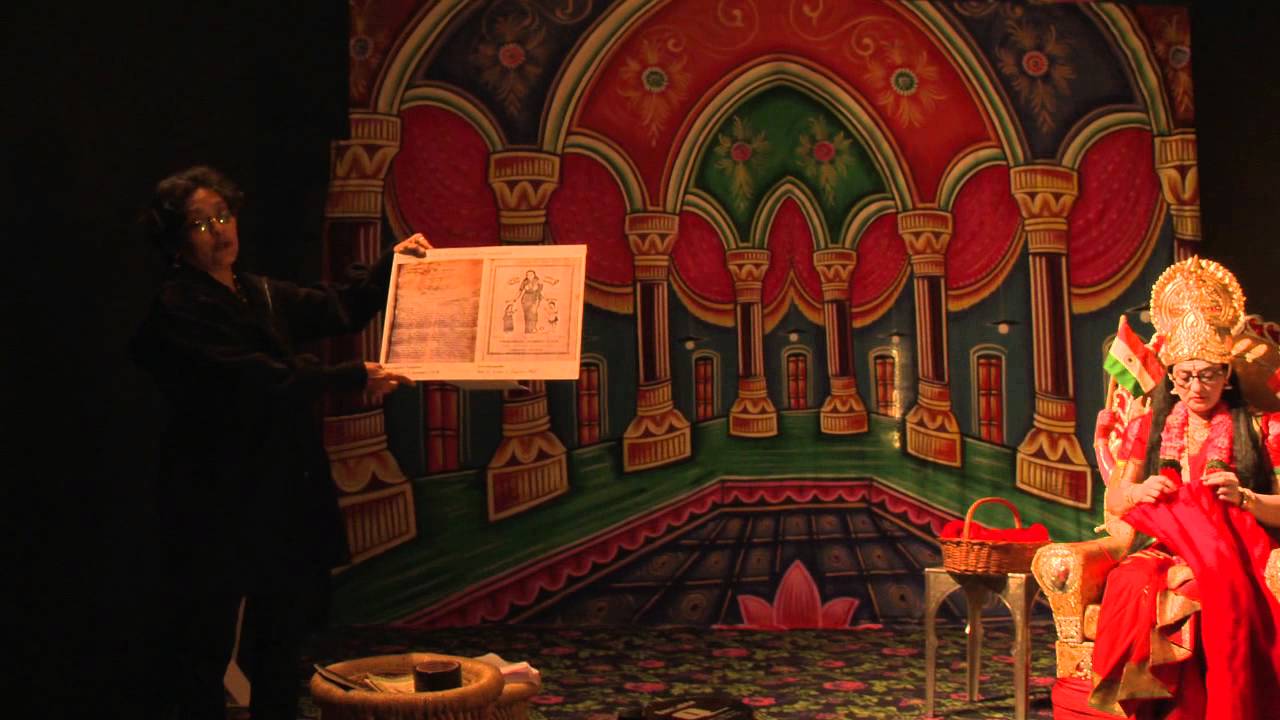 One last thought. What’s this thing about our salons only focussing on a single work by a single artist at a time? We had this experience before with Cristian Duarte devoting the whole of his talk to The Hot One Hundred Choreographers, and it was fearfully limiting. We only get the big picture from stray gossip that comes out during the Q&A (in Pushpa's case, how she's dressed up as the Phantom Lady and Mother India, and how her mother was an amateur actress who also loved staging costumed tableaux).

I know it's a lot of work to cram the whole of one's career into an hour-long talk. But you can talk about more than one work, for chrissakes. No need to vomit up everything.  But give us a little more than what we were expecting, and we'll love you forever.