Confessions of a Reluctant Festival-Goer

I’ve run a blog about the Singapore International Festival of the Arts before, all the way back in 2010, when it was still called the Singapore Arts Festival. Here's a link to my old Wordpress blog posts about it.

And though I’ll readily admit that I enjoy covering such festivals (you get to talk to ridiculously interesting people), I have to admit that the festival’s always been a little strange for me.

I can see why it was deeply important for folks when it started back in 1977. The local arts scene really was much less developed back then. If you wanted to watch something professional, something reflecting the latest ideas of the West or Japan, you’d need a festival organiser to bring a show to Singapore. 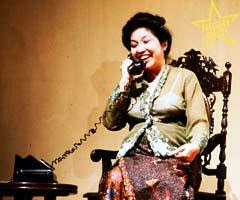 That’s how we had famous names like David Henry Hwang coming down to Singapore. The festival was a launchpad for now-famous works, like Stella Kon’s Emily of Emerald Hill, Ekachai Uekrongtham’s Chang and Eng and Dick Lee’s Kampong Amber. It even managed to push the envelope of what was considered socially acceptable – note the edition in 1986, which OKed the country’s first legal topless performance for decades: the Ballet National du Senegal in their items Rhapsodies and M’bini M’dam.

But by the time I started regularly watching theatre here, it was the late 1990s – a time when it seemed like every Singaporean intellectual had started writing plays to critique the system; when we had a burgeoning cultural scene of our own. I was happy following theatre companies like The Necessary Stage, Action Theatre, TheatreWorks (of course), Drama Box, Teater Kami, TTP. These groups were producing a Singaporean artistic identity, and I was thrilled to see it blossom.

To me, the Singapore Arts Festival was a good thing insofar as it gave these companies opportunities and commissions to stage bigger, riskier work. (Sadly, I missed the debut of Lear in 1999, because I was doing my Basic Military Training.)

But local works were always outnumbered by foreign performances – shows that had the benefit of being fine-tuned and polished while traveling the festival circuits of Europe and North America before ending up in our little nook of Southeast Asia. The Singaporean shows – ambitious, untested “world premieres” – often couldn’t compete.

And honestly, that’s how it felt back then. I wasn’t really awed by huge names like Mo Yan or Philip Glass – I just saw them as unnecessary competition, drawing audiences away from the local arts; the preserve of those who insisted that this island had no culture, and could never reach the standards of older, whiter cities than ours.

These days, of course, I’m not so bigoted about the festival. I’ve been able to appreciate that a lot of the works we’re seeing really do give us new, underrepresented perspectives on the world – often from places like Eastern Europe and Southeast Asia, which remain at the margins of world culture. The Festival organisers have put a little more effort into having foreign theatremakers engage with Singaporeans through collaborations and workshops.

But the Festival has a new problem these days. It’s just not as important as it used to be. Singapore now has a surfeit of arts festivals – not just the M1 Fringe Festival and the Substation’s Septfest, but also the dozens of little seasonally themed festivals organized by the Esplanade, the Arts House and other parties. Plus there’s the fact that we’re now an important enough international destination that world-famous theatre companies will tour here, pretty much of their own accord. It’s no longer all that special for the Royal Shakespeare Company or Peter Brook to come calling.

Which means SIFA has to try extra hard to get the attention, not just of the average Singaporean non-arts aficionado, but also die-hard culture vultures like myself.

I’ll be scribbling some thoughts about the lineup in the weeks to come.