I’m just back from a super-quick trip to Hong Kong, where I spoke at  Para-Site! In fact, my plane got in at 6pm, so I was half an hour late for Daisuke’s 7:30pm talk!

But perhaps some explanations are in order. Dance Marathon: OPEN WITH A PUNK SPIRIT! is a series of contemporary dance events that’ll be held during the festival from 21 August to 5 September – a festival within SIFA. There’s a lot of Japanese and South Asian representation. You can check out the events in the show listings here.

As a prelude to that  matryoshka festival, we’re having a couple of talks by Japanese dance experts, starting off with dance critic Muto Daisuke.

And it’s a real pity I was late, because what he was doing was giving us a crash course in modern Japanese dance: 100 Years in 90 Minutes.

Some bits I missed, but which he returned to: Shoyu Tsubouchi’s investigations in the 1890s and 1900s of traditional performing arts like kabuki and bunratsu, adapting them into modern kabuki dance-dramas.

Also the ex-geisha Shizue Fujikage’s intiation of the “new dance” movement in the 1950s and 1960s, allowing ordinary folks (including women) to participate in a form of kabuki. The building of a national identity through dance. 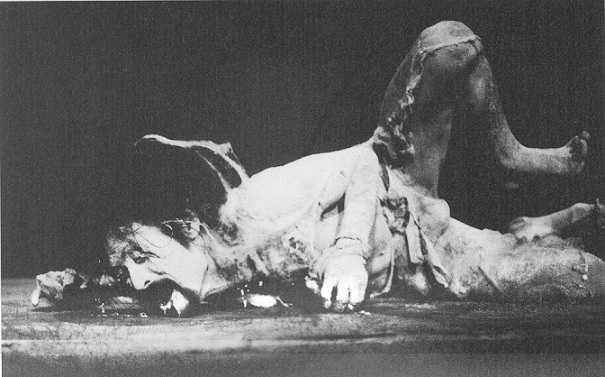 I came in during the 1970s, when he was talking about Tatsumi Hijakata, founder of Butoh, and how he was using contemporary performance to explore Japanese identity, combining Northeastern Kabuki techniques with mainstream techniques, boldly questioning the dynamic between the centre and the periphery.

Soon afterwards, we dove into the 1980s, when the Japanese public became more exposed to European choreography – Pina Bausch, for instance – through the imports of big-budget productions. The influence of new ideas and energy, plus a sense of fatigue with exploring national identity, led to new work without Japanese signifiers.

Instead, we had Saburo Teshigawara exploring body language in a purer form.

We had Dumb Type playing with gender, race; text, multimedia in their performances.

Muto Daisake: At this time there was an acknowledgement of relative poverty of cultural environment of Japanese with relation to Europe.

Seriously??? But I sort of get what he means. Europe’s contemporary dance culture involved an entire continent, plus North America – and they’d embraced Butoh from Japan as well. Let’s let choreography Ryohei Kondoh, founder of the Condors, speak about this.

Ryohei Kondoh: In the early 1990s, when I started to dance, many productions of dance performance came from Europe, and butoh also became familiar among us. I was looking at them in envy. I must confess that I thought they were wonderful…. [but on the other hand,] I think that stages do not only begin in the theatres. Theatres are closed places, but ordinary, daily life itself could already be a stage where contemporary performance can be presented.

Parallels here with Mikuni Yanaihara of Nibroll, who, despite her western dance grounding which praises precision, had a personal style of movement that was always unstable and roughly controlled.

Muto Daisuke: In this way, she emphasizes the distance between her private inner space and public appearance. I hope this makes sense to you.

He listed other super-cool groups: Idevian Crew, whose team of 15 eccentric kimono-clad dancers is too big for most European festivals to import; the strange candy-coloured all-female troupe of Strange Kinoko Dance Company, run by Chie Ito; Tsuyoshi Shirai’s choreography of listening to noises and feeling space, Natsuko Tezuko, anatomical experiments which trigger uncontrollable spasms in different parts of her body when she concentrates on specific loci: e.g. the second joint of the third finger o her left hand…

But what about the 21 st century? What about the future of contemporary dance? Here, Daisuke took us to a new level of discourse: “Post-Individualism and the Question of Community”.

You see, dance in Japan is far more of a community activity than theatre. It’s part of club culture and community rituals, and therefore a point of community debate.

Recently, there’s been worries about Japanese kids being too out of touch with their bodies. So there’s a new policy being proposed (not sure if it’s been enacted) of getting PE teachers to train them in either martial arts or dance -  categories include creative dance, folk dance, contemporary rhythmical dance. This is a little problematic, as it’ll involve the teachers having to get certified as dance teachers themselves in a jiffy.

Plus there’ve been attempts to ban dance at clubs, since it’s traditionally associated with sex work. Save the Club Noon is a documentary that tracks one specific case of this, and the absurdity of lawmakers attempting to define what dance precisely is.

Daisuke Muto: Dance is promoted in schools, but meanwhile banned at clubs. Japan has a serious problem: a choreographic contradiction.

And in the meantime, dance is being used as a tool to reinvigorate communities. For instance, after the Tohoku earthquake, the loss of traditional materials among elderly folk dance masters in the district has led to new initiatives to recover these traditions and train successors. Chie Itoh and Strange Kinoko have actually announced a “graduation” from contemporary dance (i.e. her company will no longer continue creating contemporary dance) at the Bon-odori Festival as part of Project Fukushima.

Meanwhile, Natsuko Tezuka is pursuing this sense of recovery from a different direction: she’s investigating ritual dance throughout Asia with her Folk Art Research Club, interpreting these rituals as essential artistic responses to past and contemporary events.

And to my surprise, Daisuke says he’s actually *envious* of our situation of Southeast Asia, because we are able to take from living traditional dance and strengthen contemporary dance with it. (He says it’s really hard in his country to get, say, Noh practitioners and contemporary dancers on the same page, because the theory systems behind each practice are completely different.)

So strange, how the Japanese can be so gifted, so developed, so rich in culture, and yet be envious of us.

Truly, none of us know the riches we have.