Meet NADA, a visual art and music duo that'll be staging acts as part of Club Malam from 7-9 July at Old Kallang Airport!

Pictured above are Rizman Putra (left) and Safuan Johari (right). They're both independent artists in their own right—Rizman (aka Manic Jango) is a performance artist who's collaborated in many theatre productions, and Safuan (aka Max Lane) is a sound designer and musician. Both are also members of the indie band Tiramisu.

They formed NADA in 2014 to express their love of old Malay music of the 1960s to the early 1980s. Their back-story is that they're a forgotten rock band from that era, reunited for contemporary audiences—"a new old band", they say. They'll be performing alongside Senyawa and Speak Cryptic's The Tribe—in fact, they're generating soundscapes for The Tribe, and the actors from that group will be playing their long-lost fans.

I sat down with Rizman and Safuan to get more info about their act. We talked a lot! Here's an edited transcript.

NYS: Tell us about NADA.

RP: We’re like the Malay version of Pet Shop Boys.

RP: We’re not supposed to exist. So we coined this term of Hantulogy, which is another version of Hauntology.

NYS: How did you get chosen for Club Malam?

RP: We were part of the Inside/Out Project [a travelling showcase of Singaporean creatives as part of SG50), and Noorlinah Mohamed was part of it as one of the actors. She saw NADA for the first time and she wanted us to be part of it, because… what was the reason?

RP: Because we were doing old Malay songs.

SJ: Because what we were doing was kind of nostalgic, but giving our own impressionistic take on things musically. And she wanted to explore the glory days of Club Malam night clubs of Singapore, and how is it to have our own take, our own impressions, of our unlived nostalgia. Because some of these things, you don’t just read it in history books; it’s your parents, your cool uncles who lived through this and tell you stories. You have to use the power of your own imagination.

RP: Like the story of Disco Papan—“papan” means the wooden frame of the floor. Disco Papan was famous back in the ‘70s, ‘80s. Back then the audience would pay two dollars to come and enjoy the evening.

SJ: So even the term “sarong party girl” is quite literal: last time you go to the clubs, the grandstands, the cabarets, the nightspots, then you pay 30 cents and dance with a girl really wearing the sarong kebaya for three songs.

RP: And back then the joget dancers are also known as prostitutes. That’s what I heard from Zai [Kuning].

SJ: Lantai T. Pinkie. Like, that was the only source or the only piece [of literature] to come out from that era. 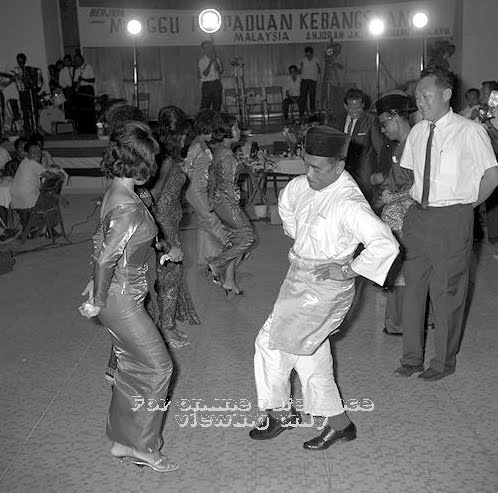 NYS: The usual focus of NADA is on music from the ‘60s to the ‘80s. How does that fit in with the fact that Club Malams were more from an earlier era?

SJ: We’re making this conscious effort for the soundscape pieces for Speak Cryptic’s The Tribe. I’ve been digging stuff up from the ‘30s and ‘40s. It’s actually like, it’s the first wave. Back then, the sailors, when they bring their own shellacs and vinyl, mambo, cha-cha, things like that, the local musicians get influenced.

[He also explained how the influence of rock and roll in the ‘60s to ‘80s—the second wave—gave birth to pop yeh yeh.]

NYS: Are you DJing or playing live?

SJ: Everything is processed electronically. Because it’s like, with NADA or even with Speak Cryptic’s soundscape, I don’t take the song wholesale. We do an edit and sample it and come up with a totally different piece to our own. How NADA works is musically I’ll build songs from samples of old Malay songs and I’ll do the arrangement, and he’ll come in and sing over it.

RP: So the lyrics are taken from a lot of old English songs. And we cut over it and it becomes a new meaning.

SJ: Because it’s still like, I’m using western methodology of sampling, and using local content and rehashing it and calling it our own. It’s not really preservation, but it’s kind of. Why I choose sampling instead of totally recreating these old songs, is because by using the old original recordings, you kind of have this temporal element, the element of time. Even if the sample lasts 13, 15 seconds, once you listen to that kind of song, you immediately notice this is something from the past.

RP: The thing about music is we don’t have a museum for it. So we’re a vessel to preserve these unknown sounds that were around back then.

SJ: It’s funny because back in the day you had major artists from Indonesia, Penang, coming here because all the good labels were here. We were running the music industry. That history has just been suddenly wiped out. Nobody talks about it anymore. It’s like the Quests, they even backed up a lot of big Malay singers, like one of the top studio bands to go to for a lot of the pop songs. Like Sarina Hashim…

RP: The guy who passed away, Ismail Harun…

NYS: So what are your costumes for the actual performances?

RP: I normally dress up in white. All white. I am inspired by Marcel Marceau and Kazuo Ohno. The idea of combining butoh and Malay songs… because of the strangeness, people just can’t pinpoint what’s happening on stage.

SJ: You know to find a definitive sound, you just can’t find an answer for it. So we add other elements in to add more confusion.

RP: And the interesting part of it is 75% of are audience is non-Malays. Berita Harian doesn’t want to cover us!

SJ: Last year Nightfest we did a collaboration with one of the Peranakan ensembles. So there was one night, these three old bibiks were there, dancing-dancing like that!

R: I think that’s the interesting part of it.

SJ: Because I want to put forward this thing, this very problematic thing that is: “This is Chinese music from Singapore, this is Malay music from Singapore.” No. This is what Singaporean musicians are trying to do. We even have one song I sampled which in Thai.

NYS: Does the venue of old Kallang Airport make a difference?

RP: The location is very special.

SJ: Because it’s exactly across the road is where Gay World/Happy World used to be. A theme park where everyone used to go.

RP: All the joget and the ronggeng clubs.

SJ: What was there? Datuk Rajah?

SJ: Back then we had our own club culture with our own music. The most famous club was Bunga Tanjong was at New World. That is where City Square is now.

SJ: Then you had the individual one. Neptune Theatre, Tropicana.

RP: Tropicana was the Zouk back in the ‘60s!

S: And the thing is all these worlds, it’s so amazing, because in the day it’s an amusement theme park for families, and then when the sun sets, the girls and the sailors come in. It really like a physical space for the common social experience, for everyone.

RP: People don’t care about this anymore. You can’t even Google it.

SJ: Now the closest thing you would have is those dangdut clubs back in the ‘90s. Legenda at Kallang Leisure.

NYS: How long have you been doing this research?

SJ: This research has been going on throughout my life!

RP: Throughout our lives, actually. I’m talking to uncles and aunties…

SJ: This is like the other side of history that you can’t learn from textbooks or museums. And you don’t know if it’s real stuff or the stuff of legends and myths. And it was something we were being so nostalgic about in SG50. Nobody was addressing that.

RP: Of course! They can’t do that.

SJ: I think it’s a sensitive area. Because people have moved on. People have re-embraced religion. It’s because of the religious revival: last time there were alcohol and cigarette ads in Malay. One of the obstacles to document this is to get uncle and aunties, all these people in the past, to speak in public about their time of youth.

SJ: So my question is, how long will it be until we take up the rug and see what we have swept underneath? It’s about potentialities. Looking back and looking forward also. Throwback, throw-forward lah.