It Won't Be Long: The Cemetery (Dusk)

But now that I’ve watched everything, I think I have to take back my words. It Won’t Be Long really is a single production. (Dawn) and (Dusk) are utterly different experiences, but they’re two halves of the same coin, almost the way the two halves of W!ld Rice’s Hotel are.

(Dawn), as I noted, consists of an abstract performance at Bukit Brown itself.

(Dusk), however, is a more literal performance about the issues surrounding Bukit Brown. It’s nowhere special - it's in the SOTA Theatre Studio: a black box with a bunch of screens here and there, and... ooh, a map of Bukit Brown drawn on a chalkboard floor.

Amazingly, the same cast is present. They're now in clearly contemporary gear – black and grey; pants, not skirts, for the women; everyone in sneakers. They start doing physical theatre stuff again – once more, the slapping of mosquito bites on their arms and legs! – and I’m mentally prepping myself for an air-conditioned duplicate version of this morning’s performance when three actors enter: Karen Tan, Jo Tan and Timothy Nga.

They’re dressed in dark grey shirts and pants. They’re not doing anything fancy with their bodies; just slipping between the physical folks. But then they start to speak.

Yes, (Dusk) has a script. It’s by acclaimed playwright Jean Tay, too – she wrote a now canonical play about exhumation and land use called Boom. But this isn’t your standard well-made play: it’s verbatim drama, drawn from countless interviews with those involved in the “Battle of Bukit Brown”, which raged in 2011 when activists discovered the land was to be cleared for a highway. 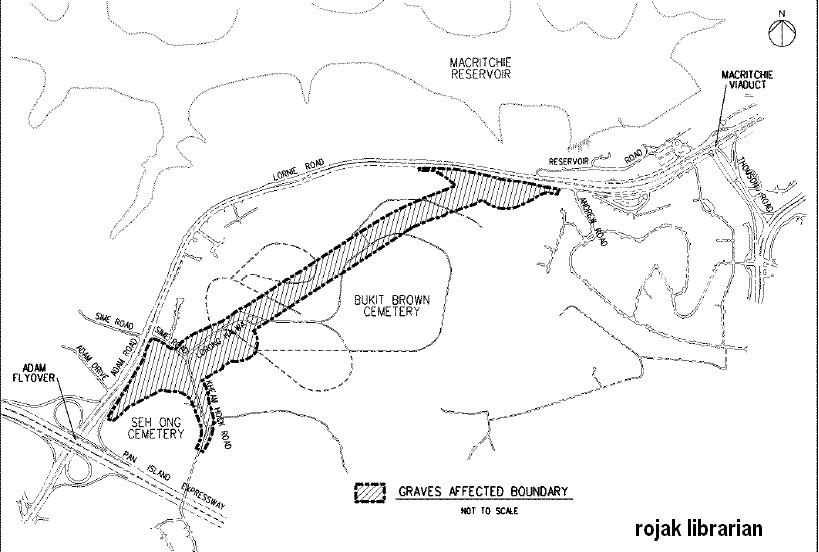 It’s easy to follow who’s speaking, because there’s bilingual translation (usually English to Mandarin) being projected on screens around us. One of the interviewees was the guy who guided me in the morning!

KC Chew: I am Chew Boon Lay’s great grandson. I died the year he was born. Sorry! I was born the year he died. I am reincarnated.

We hear the voices of Heritage Society President Chua Ai Lin, artist and founder of SOS Bukit Brown Jennifer Teo, various Brownies (i.e. volunteers for the dissemination of info about Bukit Brown) and descendants of those buried there.

And above all, we hear from Tan Chuan Jin, former Minister of State for National Development. His is the voice of the establishment, but he’s not a pantomime villain: he’s a man who’s part of the system, confident about his job, well-informed about alternatives (he brings up the point that it’s possible that people could live amongst the graves – they did in the days of the kampungs, after all).

He’s played, rather disarmingly, by Jo Tan. He’s the one who firmly believes his is the voice of the moderate, the only one of the pack who’s responsible enough to make decisions for the good of all society.

Much of the drama comes from his utter befuddlement at why people are angry at him, when all about him are voices testifying that the Ministry refused to consult with the groups, refused to discuss alternatives, refused to even honour their request for a joint meeting; how they feel ultimately betrayed enough to issue a moratorium conveying "the lack of good faith on the part of MND".

But it’s also a story of how a movement emerged out of nothing: how completely apolitical folks and activists joined forces and began can campaigning for something that mattered to them, passionately. A story of possibilities, in those heady days around the GE 2011…

And on the screen while all this is being said, we’ve got projections of newspaper articles narrating the controversies in the Legislative Council over the very building of Bukit Brown in the first place in 1922; how it was activist voices (of folks in power, mind you) that led to the creation of this space for Chinese burials. … and on stage we’ve got actors interpreting the mood through physical theatre.

I mean, it’s nice to watch, but maybe not strictly necessary. They are, however, slowly wiping out the chalk outline of Bukit Brown with their footsteps.

There's a short second act, titled The Death of Bukit Brown. This is a bit of mourning sequence, with various parties reflecting on the struggle, whether it was a good thing or not, interspersed by a Mandarin-speaking character named Ms. Ong who describes the process of exhumation - how she, too, felt betrayed when the government issued a colourful pamphlet describing how different faith leaders would bless the exhumation, and then on the day itself wouldn't even let the descendants into the cemetery.

And how her English-educated sister was furious about the fact that the exhumations were to be carried out in the daytime, when all Taoists know that sunlight should not touch dead bodies. They organised a separate exhumation with their own money, an LTA official nervously watching by lamplight, believing he was doing something for the family, an opinion with which the sister did not concur. Then a voiceover of a poem by Khoo Seok Wan, a poet who was buried in the cemetery, leaving behind an epitaph of his own composition.

Khoo Seok Wan: 海山無地築仙龛
There is no space in the seas and hills to build my abode
埋骨猶能躍劍潭
How can the buried bones leap across the sword lake
日下三徵終不起
Even if you beckon 3 times, I could no longer arise...
星洲一臥忍長酣..

And then a closing song -  growling rock, loud as bulldozers - by The Observatory. They'd been hiding behind a screen this whole time! I'd actually forgotten they were in the show!

Lead Vocalist Leslie Low: August is the cruellest
You stuff me up with straw
Soon we forget
What is wrong
What is right

... it's a weird match. But then all of this is weird, isn't it? English-educated Gen X folks fighting to preserve an old Chinese cemetery; the National Heritage Board unable to protect heritage; SIFA getting public money to stage a theatrical documentary about civil society activism.

Honestly, I'd like this to be restaged. We don't get all that many verbatim theatre works here - Alfian Sa'at's Cooling-Off Day was a notable exception - and this is a poignant work that exposes the rise and fall of an activist movement that's too easily forgotten in ever-changing Singapore. We need reminders of what ordinary people can do. We need reminders of what ordinary people haven't been able to do quite yet.

And although (Dawn) and (Dusk) pair with each other beautifully, it's (Dusk) that lays down the numbers and arguments for everyone to see. 200,000 graves to make way for a four-lane carriageway. And meanwhile, 24 golf courses remain untouched.

But hey, if Drama Box has the money, I wouldn't mind seeing both The Lesson and The Cemetery make a comeback. This is social theatre, man. You can't just perform and pack up your bags because everything's been solved already.

The issues are still there. You have to keep talking.