This is - to a certain degree - a companion piece to an earlier post I wrote, On Being Critical. In that post, I stated that all art is, by nature, critical, since it serves as a commentary to the imperfect world in which it is formed.

Now, I'd like to extend that idea by talking about the function of an arts festival. Why should we have month-long programs chock-a-block with performances?

Certainly, quantity is something to be celebrated. The fact that one can go out almost every night during the Arts Fest period and have something to do is not to be sneezed at. But more crucial still is variety - rather than turning up for thirty days of the same old thing, we crave mutliple multiple names, multiple faces, multiple options to choose from. Maybe even multiple art forms, multiple nationalities, mutliple perspectives that we haven't seen before. Crazy idea: we might even want to expand our minds with art.

That hunger, that curiosity, is what excites folks who curate arts festivals. They're opportunities to introduce audiences to the new, the unexpected, the different. There will, of course, be the audience members who're firm in their favourites: they just want a piano concerto, thank you very much, or a classical bharatanantyam performance, or a feel-good work of social theatre by established Singaporean actors they already know, and nothing else. But there's the ever-present opportunity for experimentation - deciding to go for an Indonesian Wayang Wong performance or a Korean reintrepetation of Lady Macbeth, for instance - and such moments of unlikely contact have the potential to be mind-blowing.

(That Korean Lady Macbeth really happened, by the way. It was staged here by Theater Moollee in 2010, and by all accounts, it was amazeballs.)

But new perspectives aren't only based on nationality. They're based on other aspects of identity as well, such as class, gender, race, age, language, religion, disability and sexual orientation - the usual categories of diverse populations such as ours.

We also saw a fresh take on queer sexuality:  South African choreographer Mamela Nyamza's I Stand Corrected, which dramatises the horrific phenomenon of "corrective rape" against lesbians, in which men rape a queer woman, believing it may turn her straight.

And back in 2012, No Theatre's End of the Road, a choral performance by an American senior citizens' performing group whose ages range from 73 to 90.

The same year, the festival played with language, creating a Mandarin literary translation of the Singaporean/American gay-themed play A Language of Their Own, thus acquainting it with a new community of Chinese-speaking theatregoers.

And when an arts festival showcases traditionally marginalised voices - the disabled, the queer, the old, speakers of languages other than English - it isn't just sharing fresh perspectives with audiences. It's making redress for the fact that these voices are underrepresented or misrepresented in mainstream media. It reaffirms their value in the world by exhibiting their creative genius.

Tomorrow, the PinkDot rally is being held in Hong Lim Park. It's advertised as a rally to celebrate the freedom of love, but it's also a celebration of diversity, sexual, racial and cultural. Small wonder that many Singaporean artists are regular attendees, including the directors of upcoming SIFA production Hotel, Ivan Heng and Glen Goei: 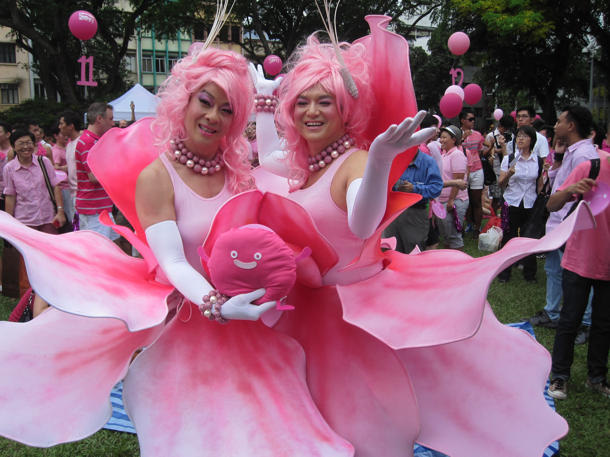 But if the event it gets rained out - as some hope it will be - I'd like to remind people that there are other celebrations of diversity happening all round the calendar in Singapore.

So let's hear it for arts festivals.

May they sing with many voices, especially the ones that don't get heard enough.