Show Me the World Symposium: Day 2

0839 hrs: Got here early. The tech crew has set up everything and are amusing themselves by pretending to be bloviating curators.

0927 hrs: Melati Suryadarno and Tang Fu Kuen are here, and some others. But there's still a lot of empty chairs. It's way too early in the day, Gonna catch up with them a little - haven't seen Melati since Flying Circus Project 2007!

0943: OK, enough people have turned up for Keng Sen to start talking. (He started earlier, but my tummy's still calling me away every hour.) He's talking about themes in Southeast Asian curatorship: exotic spectacle, fashion and practice.

He notes that the speakers for this morning wear mutliple hats: Fu Kuen is a producer as well as a curator; Melati is an artist and a curator. 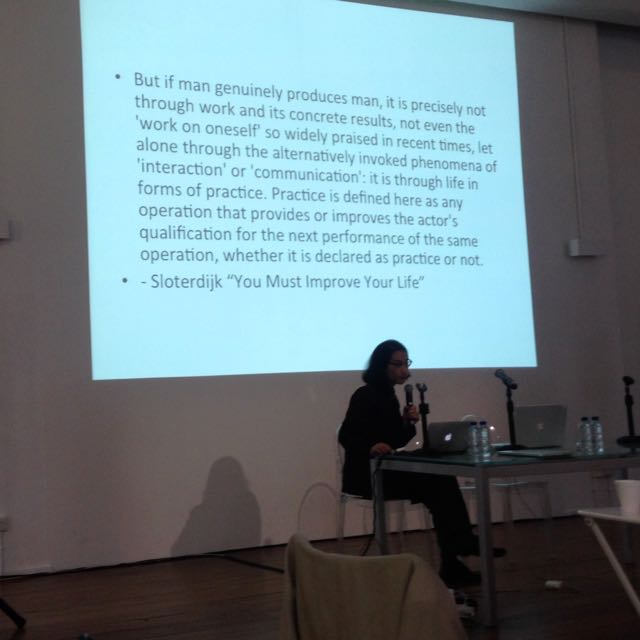 0952: Now Tang Fu Kuen's talking about his own journey as an artist: studying in the inaugural theatre studios batches at Victoria Junior College and the National University of Singapore (where he says his teachers were bad, but the libraries were good), working as an actor for TheatreWorks, then leaving to work in Bangkok in antiquities conservation, and later studying at Goldsmiths media and becoming an independent dramaturg and curator.

TFK: A friend asked me why do you do what you do? I said, I fear mediocrity.

And that's why he can't stay in Singapore, he says. The island's too small.

He also complains of how underrepresented Asian contemprorary culture is at Western festivals. How they're always inviting the same old groups: Cloud Gate, Dumbtype,  Sankai Juku (always some butoh group).

TFK: A lot of my work was about being tired of seeing mythical bodies on stage – not humans but metaphors, seeing people spinning like mystical clouds. I thought there was a deeper dynamic to be had, with human agencies at work.

And his personal philosophies as a creator. Here's one taken from a Goldsmiths prof:

TFK: When you write anything, when you write your essay. When you make a proposition in your dissertation, never quote big names as if they were gods. That is a cheap student, that is a student who is insecure. Because a good student has already imbibed the wisdom of the words, and is ready to apply it.

And his own modus operandi:

TFK: Practice is not just a habit, you cannot get up and do it like you brush your teeth. I set myself certain tasks: I make sure I do my homework by reading a lot, thinking a lot before I even do. Looking at others’ practices and then finding my own reading through them. So this is what I do continually is knowledge accumulation, knowledge capital.

He's got a knack for this - a kind of encyclopedic mapping-mind. He even used to read the Yellow Pages as a kid, he said.

Personally, I'm pretty frustrated that he didn't SHOW any of his work. On topic, yes, but this presentation was really abstract.

1020 hrs: Melati also doesn't quite identify as a curator. But she's got an interesting story of migration too - left her artist-parents in Indonesia for Germany in 1994, and had to get used to being THE Indonesian in the burgeoning Berlin arts scene of the nineties, with all the exotica that entailed. R esisting exotification - rolling her eyes at Indonesian exhibitions which emphasised tradition and the repression of the Suharto dictatorship, because there is so much more.

She began stepping out of her comfort zone in 2000, when a group of 40 American artists - gamelan players, Ramayana dreamers - asked her to help organise a tour for them in Java and Bali. With all the logistics involved in that, she began finding a place again in the Indonesian arts scene, facing their questions, figuring out her identity.

MS: At that time people started asking, Melati, why are you dancing on butter?This is not Indonesian culture. But for me this was very important, doing my activities. For me, the most burdening thing is to carry on the historical baggage. Once you go abroad as an artist you are asked to be a representative of your group, your culture, especially when you are coming from Southeast Asia.

Since then, she's started an artists' lab in Solo - later reduced to a series of workshops, because of the costs - where artists can develop a work. A touch of the residency program experience that she had in Europe. She also gets them gigs in the West sometimes.

MS: But my question is, if you have this dream, why is it so important to be abroad? And what do you have to contribute abroad? Did you really master your practice?

1056: KS is introducing the Q&A with one of his buzzwords. This time it's NODE: he's reading off his Macbook dictionary that it can mean "a localised swelling". And he says we should think of Melati's Solo site in this way, not a venue, but a localised swelling.

I find the visuals of this very disturbing.

1142: I kind of tuned out during the Q&A (spent a bunch of it in the toilet, predictably) but the general consensus amongst my friends is that the panel weren't really answering the questions. And yes, I am frustrated by how this symposium is approaching the topic of curatorship so indirectly, so abstractly, with so much emphasis on the Western gaze.

Fu Kuen did have something interesting to say about his work on the curating board of the Indonesian Dance Festival, though.

TFK: We're talking about post-empires, so let's talk about the post-exotic: either nothing is exotic or everything is exotic. I’d like to go more to the latter.

So for a recent edition of the festival, he decided to invite mostly Indonesian choreographers - but specifically Indonesians outside of Jakarta, outside of Yogyakarta, outside of Bali and Solo and Sumatra and the traditional centres of cultural production. Mobilising artists as far as Padang Panjang, from the outskirts of the archipelago, which is huge.

And of course this pissed off the Jakartans, but Fu Kuen says he's tired of how they keep on performing urban malaise, urban soullessness, urban anonymity. Within a single country, instead, he was able to summon really good works, revealing completely different perspectives in dance.

Once again, I wish he'd shown us a bit of this work. But it's a concrete demonstration of the core theme of this symposium. D ecentralisation, new perspectives from unexpected places.