First of all, I've gotta apologise for wrapping up the festival so late. I've spent the past week prepping for a writers' residency at the Toji Cultural Center in Korea, which means my blogging's had to take a back seat to a ton of other things. Also, I kind of want to keep my full review of The Incredible Adventures of Border Crossers till the almost-end of this year's entries, what with its status as the centrepiece of the fest, a Creation of Festival Director Ong Keng Sen ©, etc.

But Border Crossers wasn't just a performance at SIFA - it was also a work of installation art by Francis Ng, housed for three nights at Tanjong Pagar Railway Station. It's basically loads of projections against pasteboard archways and walls, made up of video footage from the original performance in the Palais de Tokyo, Paris.

I know that's not a very articulate art criticism sound bite, but the circumstances of the work make it pretty difficult to conjure up passion. After all, it's not a fantastic, subversive new adaptation of an existing work - it's just Keng Sen's material, artistically projected on nice big surfaces.

Plus, you can't get a whole load of visitors when there's nothing live going on at the venue, as we found out at Margie Medlin's The Projectionist. Worse still if you at first announce that it's a ticketed event for folks who watched the performance, and then only open it up to all comers later.

Not that it wasn't kind of gorgeous and epic in its own right:

Imagine all that with Kaffe Matthews's mad musical score echoing through the station.

And I was lucky enough that when I came on the final night, there were in fact some visitors, strolling amongst the installations:

Some folks brought kids. They had some fun with the shadows:

And it turns out these installation items are props from the Paris production. So Francis didn't really have to manufacture very much.

But the question remains: why do this installation at all? Two reasons, I think:

#1. Border Crossers was originally going to be staged at the Railway Station. And that would've been thematically perfect - the history of the station is connected with crossing borders - hell, to step into the station in the old days was to step onto Malaysian property, and the building itself was created by a Serbian architect, inspired by another railway station in Finland, with Italian statues and British murals.

So to hold some incarnation of the show there honours both the history of the theatrical production process and the history of the building. (Also, it would've meant that ticket-holders who arrived at the wrong destination at *something* nice to see.)

#2. Since SIFA had already paid up for the rental of the station for the entire festival period, it would've been a shame not to make use of it in some way. Folks just love taking photos at the station, and it's at its most beautiful at night. So to have an activity at the station at the end of SIFA was a bit of a farewell to the venue, as well as an affirmation of Keng Sen's stance that it should be turned into an arts space in the future.

#3. It's just a random opportunity to glorify the name of Francis Ng. And why not? He's a youngish Singaporean artist whose practice is hard to pin down - he works with photography, installations and performance - but he's often deeply interested in investigating spaces: 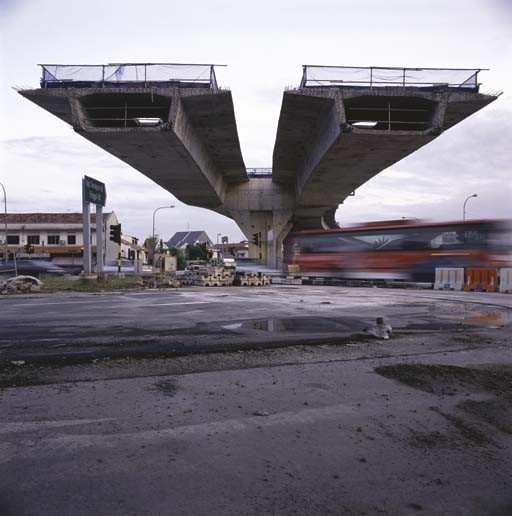 So yeah, I do kind of dig this show.  It even had my boyfriend doing fancy hand gestures in imitation of the performers on screen. (I didn't get a proper photo, alas.)

And it's nice to be able to say goodbye to Tanjong Pagar, after it's served us so well in The Open and the Dance Marathon.

Let's not stay away too long!